Note: This is Part 2 on a series about Delayed Viewings! If you missed Part 1, you can catch it here.

So you have tickets to a Delayed Viewing (DV). Great! While you can go right in and really don’t need to prepare, here are some extra things you might want to know to make the experience a bit more enjoyable.

Fans like to treat DVs like actual concerts. Even though the performers aren’t actually there, it’s still a lot of fun to pretend and share the thrill with everyone else present. That includes but is not limited to song calls! If you’re new to anisong/idol fandom, song calls are parts of songs that the audience often participates in. This can include simply singing the lyrics to certain parts of a song, or doing special types of calls such as yelling “hai! hai! hai! hai!” on the beat with the rhythm of a song.

If you don’t know any calls, it’s fine! Calls are totally optional and no one is going to give you a hard time for not doing them. But if you want to learn some, here are a few great sources:

If all this seems very daunting, don’t worry. Most of the time, you can just go along with what everyone else is doing. It’s better to learn this all through experience anyways! So don’t sweat it if you don’t want to study up.

Depending on the artist/group, there may be calls & responses when the artists introduce themselves. Again, this is totally optional, but a little fun if you know what to do and can go along with everyone else! Here’s a video guide on the Aqours seiyuu calls & responses.

All About Pen Lights

You’ve seen them before. Those weird light sticks. They’re at anime cons, anisong concerts, karaoke gatherings, and of course, DVs. These are often called penlights or Kingblades (“KBs” for short) and are a great way to enhance any anisong event! Note that Kingblade is a brand name, though! Not all penlights are Kingblades, but it’s common to use the term for all pen lights anyway (kind of how “Nintendo” was often used to describe all video games back in the day). 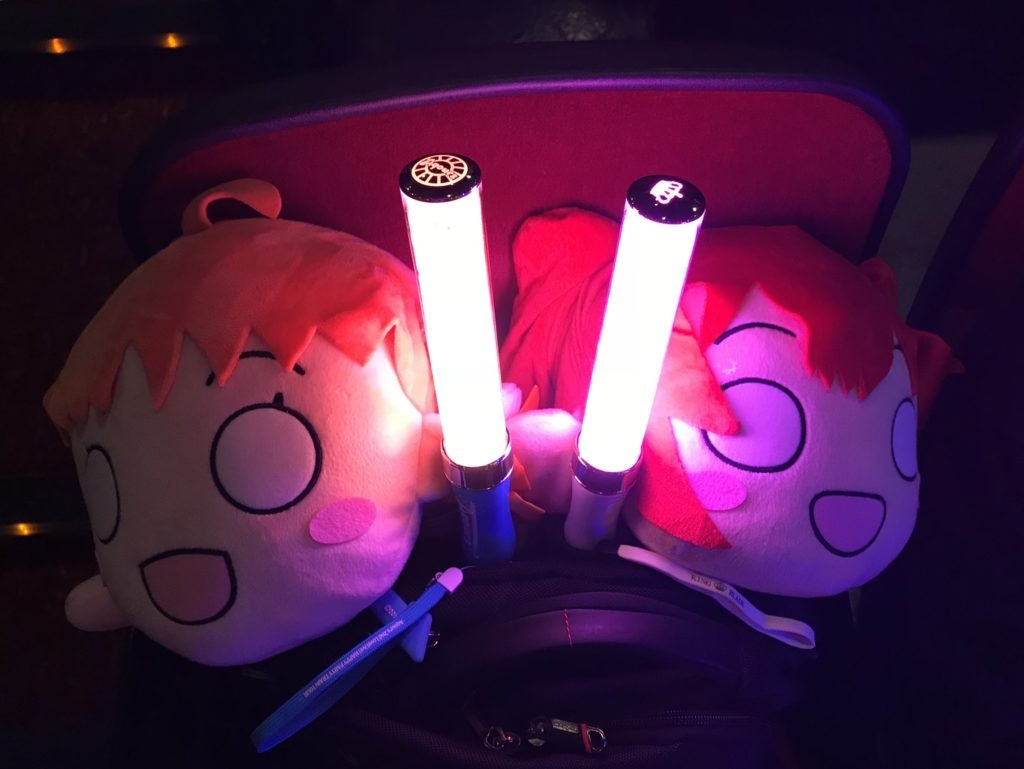 While many of the penlights you see will be branded ones (such as Aqours or BanG Dream! branded ones), there are generic ones that are relatively inexpensive and easy to purchase. The Daisenko 300 Pen Light will probably give you the best bang for your buck, as it’s easily programmable, has an “oshi” button for immediately jumping to your best girl’s color, and even has a curved handle for extra comfort. Kingblade brand pen lights can be found on Amazon, but they’ve recently shot up in price. If you can find a Kingblade X10III for a decent price, those are great, as they’re easily programmable with a QR code.

You might be wondering, what’s the point of programming these? Well, each group has a specific set of colors. For example, there are 9 colors for Aqours – one for each girl. A generic pen light will come with 15 or more colors on it, and you don’t need them all! So, you’ll need to program it and remove unwanted colors. If you buy a franchise brand penlight, such as an Aqours one, it will already be programmed for you with the right colors.

The guides linked above explain more about colors. Again, if you don’t know what to do, just do what everyone else is doing. When everyone’s penlights are showing different colors, then it probably doesn’t matter what you set yours too. If everyone is set to blue (such as during Aqours “Koi ni Naritai AQUARIUM”), then set yours to blue as well.

Next, let’s talk about UOs. UOs, or Ultra Oranges, are super bright chemical glowsticks that only last about 3-5 minutes. They’re brought to DVs in large numbers by fans and are cracked during the most intense and/or emotional parts of songs. You can get UOs at Lumica USA or on Amazon, and they can be a bit pricey. If you’re at a major anime convention such as Anime Expo or AnimeNYC, chances are Lumica USA will have a booth set up and you can buy them there without having to pay for shipping.

As mentioned earlier, UOs are for the best parts of a song. Whatever that is, is up to you. A common time to break a pair of UOs is during the song’s ochisabi – the part of the bridge that resembles the song’s chorus but is softer and/or slower. During a hype song, it’s common to “cyclone” the UOs above your head (be careful not to hit someone or accidentally throw the UOs!). If it’s a slow song, do a kecha (slowly raise the UOs up and down in front of you) instead.

While having fun is absolutely encouraged at a DV, please remember that you’re in a public theater and to not cross the line. If you bust a lot of UOs, please throw them out and don’t leave them lying on the floor for someone to trip and fall on. Be careful not to hit others with your pen lights and UOs.

During the show, while calls are encouraged, don’t be disruptive. If you think yelling “IETAIGAAA!” during a slow emotional song might be a fun idea, trust me, you’re the only one who will find it enjoyable.

Finally, and most importantly, DO NOT RECORD THE SCREEN. Not even a tiny bit. Japanese studios are very protective of their intellectual properties and will not hesitate to blacklist theaters, or even the entire country if we become known for spreading clips of the copyrighted material. It’s a miracle in and of itself that Japan is willing to give us a chance. Don’t ruin it for everyone else.

That’s about it! If there’s anything you feel a little confused on or think I should write a separate post about, please hit me up on Twitter @Jonbaruby. If you’d like a nice summary of a few of the things I discussed here, take a look at the video below. And above everything else, BE SAFE AND HAVE FUN!