Otakon 2021 happened from August 6-8, 2021 at the usual location of the Walter E. Washington Convention Center in Washington, D.C. What wasn’t usual about this con was that this was the first major anime con to happen since the COVID-19 pandemic. Despite the state of uncertainty looming with the ever-changing state of the pandemic, compounded by Otakon staff only having 2 months to prepare for the con, I’m pleased to say that everything went very smoothly. The con staff did an excellent job with what they had, and my friends and I all had a lot of fun.

My friends and I arrived Thursday night, as we often do, to check into the hotel room, grab our badges, and enjoy a nice dinner. If you can afford an extra night at the hotel, it’s almost always worth coming in a night early to settle in, that way you don’t need to rush in on Friday and check-in in the middle of the day while the con is going on. You also save a huge amount of time by picking up your badge on Thursday because the line is much shorter.

Friday came along and the main convention started. Panels started as early as 9:00am and I was crazy enough to be awake and ready by then. I absolutely did not want to miss the “Brand-new Idol Shenanigans: Japanese Underground Idol Groups” panel that started then. I know this isn’t exactly surprising, but most of the panels I went to revolved around idols or Japanese music in some way. I’ve wanted to learn more about underground idols  (or chika-idols) since attending a live in Akihabara in 2019 and being impressed with how different the scene was from more mainstream idol fandoms. This panel was actually Part 1 of a two-parter, with the latter half being on Saturday. At both panels, I learned a lot about a ton of groups I had never heard of and will definitely be researching more. Fortunately, I found most of them on Spotify. Here’s a list of the artists with relevant links, provided by the panel host, who goes by the name “E-san” (Eさん).

Other interesting panels that happened on Friday were:

Saturday had plenty to offer as well:

But panels weren’t all that Otakon had to offer. Despite not being able to secure any Japanese guests due to the pandemic, Otakon staff still managed to pull through and put together some excellent main events. On Friday night was “OPENWORLD,” a video game music concert conducted by Eric Roth. Music from a wide variety of games was performed: Sonic, Mario Kart, Halo, Horizon: Zero Dawn, Pokémon, and much more. 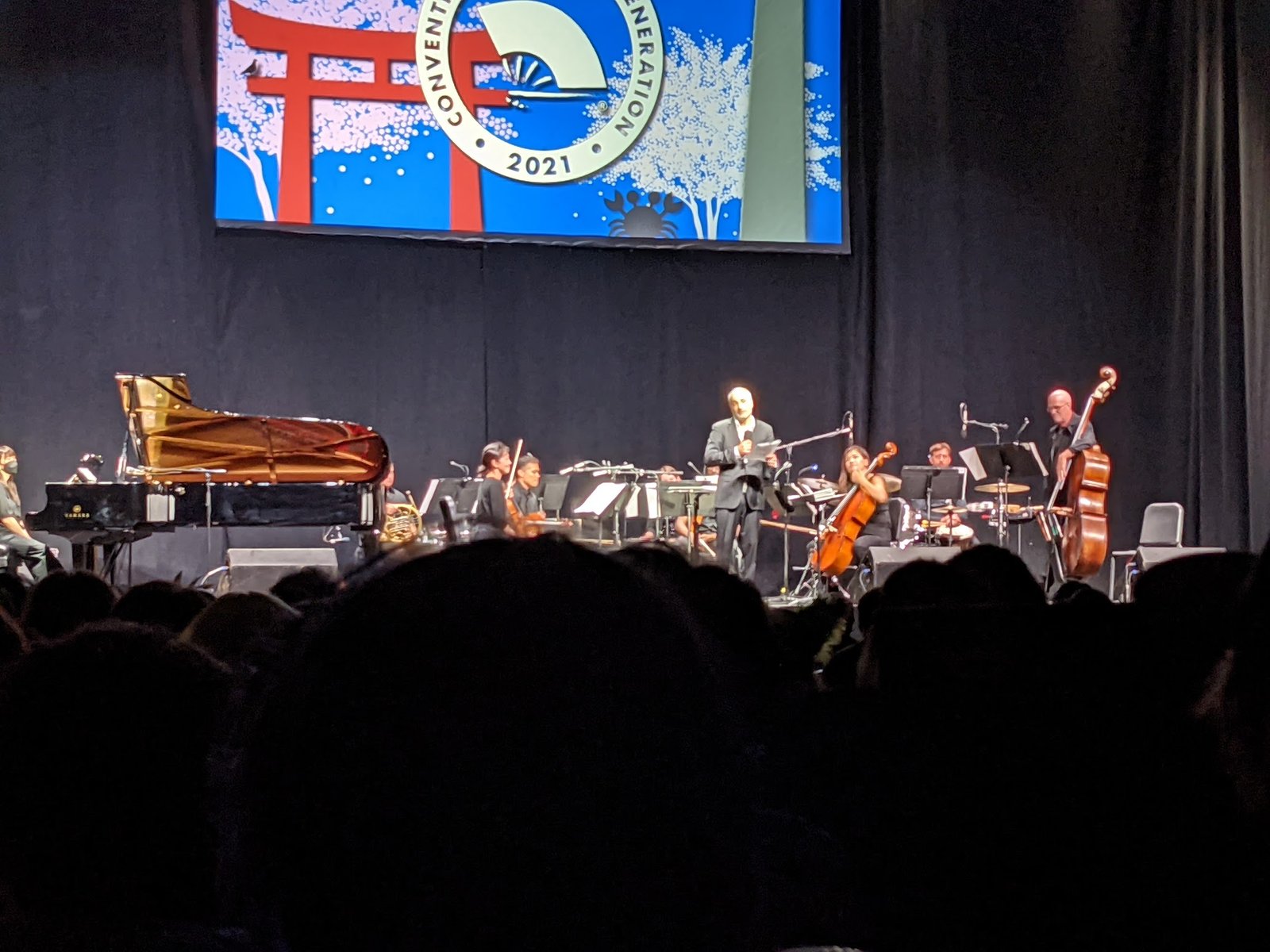 On Sunday, the NYC-based J-MUSIC Ensemble performed a concert full of great jazz covers of popular anime and game music. Songs from Splatoon, Persona 5, Evangelion, Cowboy Bebop, and Kingdom Hearts are just a few examples of what we heard at this concert,

Aside from panels and concerts was the rest of the con, and what con is complete without a dealer’s room and a game room? The dealer’s room was sadly kind of barren this year, but I still managed to spend a chunk of money at the Retro Saikou booth. There was very little industry presence this year, with the only names I recognized being Media Blasters, MangaGamer and Japanime Games. Funimation and Sentai were nowhere to be seen, but that probably worked out great for the exhibitors who did come, so I’m happy for them. Some cars were on display in the back, including the Toyota Sprinter Trueno GT-APEX from Initial D. Lots of manga shops were present, proving once again that manga popularity is at an all-time high right now in America. Aside from that were a few cosplay shops, some other merch stores, nesoberi/plush shops, and tabletop gaming shops, none of which had anything I needed but still seemed to always have a crowd of people in front of them, likely due to the limited selection of booths amidst such a large crowd. 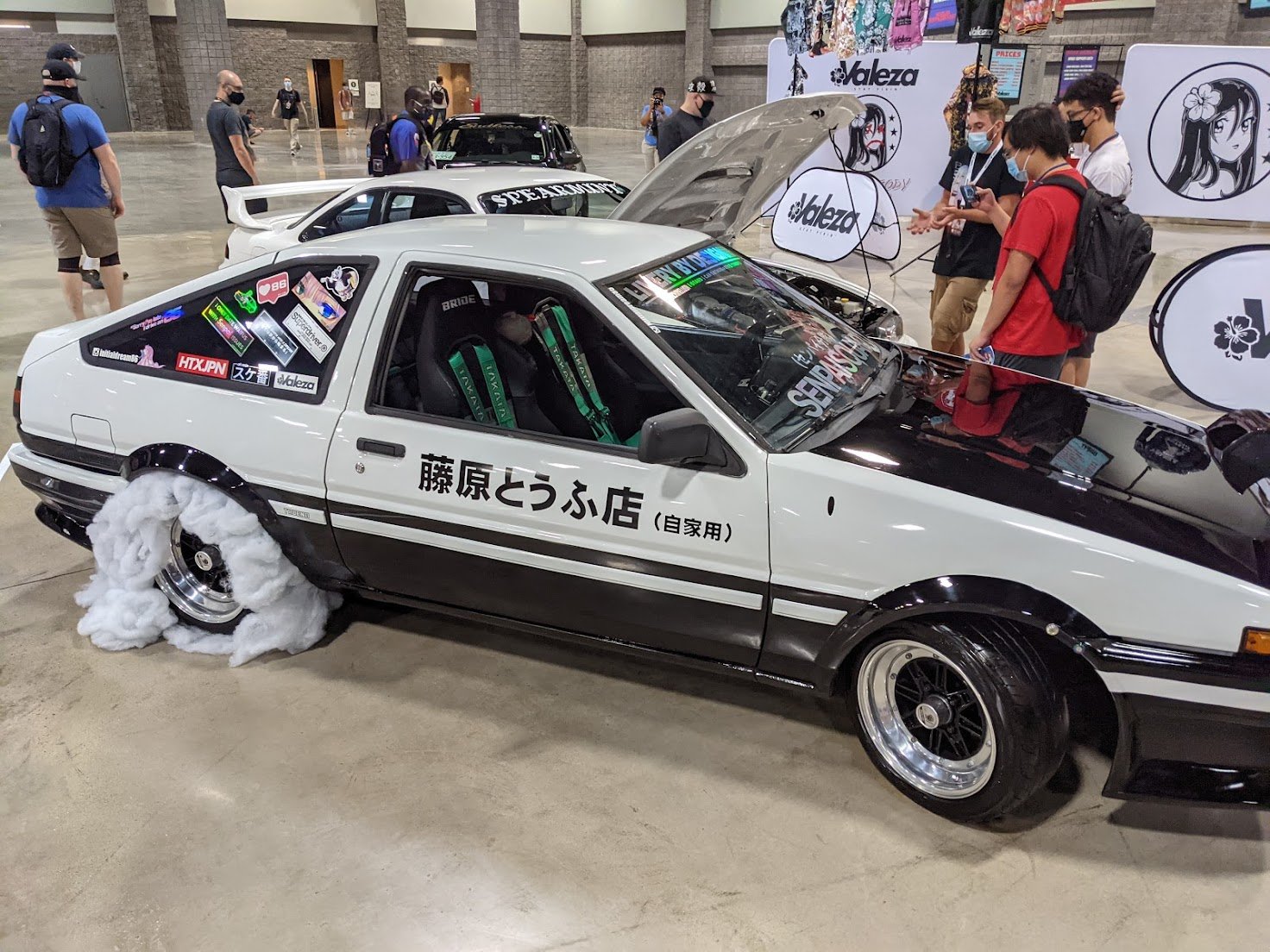 The game room was no different from Otakon’s usual fare – several booths up front consisting of indie developers showcasing upcoming games, followed by stations for Just Dance and Rock Band, tables for tabletop gaming, lots of TVs set up for console gaming, and arcade cabinets in the back consisting mostly of rhythm games. Wild Bill’s soda also had a station set up, keeping thirsty con-goers satiated.

Naturally, since COVID-19 is still a thing, masks were required at the convention, even for those vaccinated. This rarely was an issue for me except for a few times when it became uncomfortable after wearing the mask for 8+ hours straight — but it is what it is. I didn’t see anyone inside the con not wearing their masks unless they were eating something, so I’m really not concerned about any issues coming up from this. All in all, despite the pandemic and other uncertain matters, over 25,000 people came to Otakon 2021 and I could not be happier for them. I really hope this year’s success helps them recoup some of their losses from last year’s cancellation. At the closing ceremonies, those who remained at the con applauded the amazing job staff did this year, as they marked their calendars for next year’s event, taking place from July 29-31, 2022.

Otakon has always held a special place in my heart since I started going almost 15 years ago. Some of my most cherished memories have been made there, whether it be through good times with friends, great food, or meeting guests of honor. I can’t wait to come back next year.

Thank you, Otakon for bringing back a sense of normalcy to the world.